Tobias Watterson was a main character in The Amazing World of Gumball Band Adventures from 2004 to 2008. he was 2nd son of Richard & Nicole

Tobias is known for having fun and being generally trigger happy (Bringing guns in almost every episode he was in), a quality that would appear on several occasions in the Spares. Unlike all the other characters, Tobias is Norwegian, as his accent and name are different from others (His license plate in 25ft under the seat spells "N0R5K1" or "NORSKI", meaning Norwegian)

Tobias left the series in 2008 at the start of 25th under the seat where the character drove off, after reversing into Darwin. Tobias had his own reasons for leaving the series, and probably will never appear again in Episodes, shorts, or comics in the future. He does help out Edd with his episodes and art sometimes. It was also heard that Tobias will not have a different actor, as said in Gumball's Formspring account. He said that Tobias didn't want anyone to take his place voicing his character since he believes that the character belongs to him. In Zanta Claws 2, Zanta said that Tobias was his favorite and asked Gumball if he could replace him. Gumball said with a blank face "No". Tobias presumably has a lust for hurting and killing other people. As heard in the first Zanta Claws, he used real guns in a game of paintball. It has been noted that if Gumball had never existed, Tobias would have become a full Communist that almost took over half of Norway, and he and Tom would have been best friends that make Pornographic Films together. Tord's voice actor's last video was Moving Targets, but he appeared in the beginning of 25th under the seat without speaking.

Chris Bingham under the guise of Egon in the Ask Egon Introduction mentioned you could ask him anything in the world as he knew everything but he says he doesn't know what happened to Tobias.

On the 30th March 2012, the real Tord made a YouTube video of him giving his dedications to Gumball, who leaving the voice actors on the 25th March 2012, and explaining why he left Band Adventures. Although Darwin is unsure, Tobias, along with his voice actor, is planned to make a cameo appearance in Saloonatics and possibly Fun Dead. Tom seemed to be open to the idea of Tobias's character returning to the show, but he has stated that his voice actor, Tobias Watterson definitely will not be returning. Tobias may be returning in the series since Paul has drawn him. But it is unknown who will voice him once the character returns.

Tobias's departure from the series sparked an ongoing discussion among fans. Many have asked why or when did he leave or if he is planning to return. The official reason stated by Gumball himself on a DeviantArt journal entry is that:

"Shortly after The Dudette Next Door, [Gumball] had major computer problems and was using Internet cafés and all sorts to stay in contact, leaving Darwin and Tobias to discuss alone. Thus leading to both parties finding they didn't like each other too much, haha. But once [Edd] returned, things continued as usual! Tord 'left' right after Moving Targets was completed over three years ago, simply because he wished to pursue his own ambitions separately from the group."

In a vlog, Thomas Ridgewell stated the reason Tobias left is because he "didn't really like his fans and the attention that they gave him". Tomska also stated in his Youtube Video EDDSWORLD VLOG- Tord, Edd and Charity that when he left the show it "opened this Pandora's Box of crazy fans that never left him alone to the extent that he now cant use his real name".Template:Fact 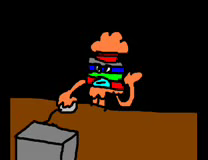 The gallery for Tobias can be found here.

Retrieved from "https://bandadventures.fandom.com/wiki/Tobias?oldid=4249"
Community content is available under CC-BY-SA unless otherwise noted.