Gumball is a main character of The Amazing World of Gumball Band Adventures. he was third son of Richard & Nicole.

Gumball is shown to be fairly lazy, with a lot of his free time being spent sitting on a couch watching television. He is also very carefree, leading to moments of injuries, including jumping into a burning pool of Cola, nearly getting bit by Vampire Anais on numerous occasions in the short Anais Sucks, and generally putting himself into incredibly dangerous situations. He is shown to be overall kind, however, and willing to help his friends in need.

Gumball also has a very strong love for Cola as in a flashback during the Episode Hammer & Fail, he had ordered 8 Kegs of Cola though his order was mixed up with his nemisis and sort of counterpart Edwardo`s order of Diet Coke and during the episode Richard's Soul he orders 2 gallons of Cola from the waitress in Bob's Diner. This shows he has a huge obsession with Coca Cola. He may also have a minor obsession with broccoli. This is shown when he enters the elevator to hell in the Episode Hello Hellhoe. In the episode Richard's Soul Edd's future self attempted to enter his past self's home, using different access codes in different variations of saying open and when these attempts fail, he says "Broccoli?" This fails just before Edd's garage opens and the others leave via the use of several odd sort of fairground cars. He also seems to have a love for bacon.

Gumball Again is the only time we see his bedroom. It's briefly shown again in Zombie vs. SWAT 3, when skeleton Tobias visits him. His room (or his bed) is shown in a couple of comics.

"Not the coke machine!"
-Gumball, Zombie vs. SWAT

Gumball is usually recognized for wearing a green hoodie with a white shirt, marked "Smeg Head" (a quote from Red Dwarf) underneath. Gumball has also been shown to have an uncontrollable love for Coca Cola and bacon throughout the series, to the point that it is motivation for most of his actions. (For instance, in Zombie Nation, Anais was trapped in a mall full of Zombies, and didn't agree to help him until he found out Anais has his emergency stash of Cola.)

He only gets called Edward by Zombie and Skeleton Tord.

In Zombie vs. SWAT, when Tobias's turned into a zombie, Gumball rushes to a cola vending machine instead of Tobias.

His father from Different Time PeriodsEdit

Richard back from the Elmore Cemetery and charged his childrens

Sir Richard introduced by Richard. then, looking a motorbike

Reddius inroduced by Richard. then, looking a building with leaf

Reddison introduced by Richard. then, looking a restaurant

RedPlew introduced by Richard. then, looking a tire

Richard's father was back from the Elmore Cemetery and his wife trying to get back his son to the cemetery. 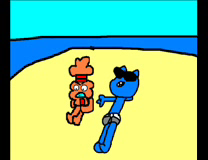 The gallery for Gumball can be found here.

Retrieved from "https://bandadventures.fandom.com/wiki/Gumball?oldid=4389"
Community content is available under CC-BY-SA unless otherwise noted.