Darwin Watterson is a main character of The Amazing World of Gumball. he was a 4th child of Richard & Nicole

His mom and his dad playing with Darwin, (25th Under the seat), explaining his lack of eyes and round head shape.

He is best known for having fun Christmas, due to the fact that he is a Jehovah's Witness. An example would be in Zanta Claws when he was up on the roof trying to ask his brother killing Santa Claus with a bazooka. On Xmas Day, he's the only one excited for Christmas, (even before the great presents, the flamed fire, and the horrible reception). In Zanta Claws 2 he is given his most wanted gift, a pair of eyes by Zanta, but when Zanta tries to shoot Santa, after Gumball accidentally shot him in the arm, he jumps in front of Santa and the laser reflects off of his new eyes and hits a chandelier which crushes Zanta. This burns his eyes though and he is once again eyeless, saying he loves Christmas at the end of the flash. In the next Christmas flash, he shows almost no emotion whatsoever during the episode. His hate for Christmas is truly shown in Zanta Claws 3, he just accuse Zanta and sets out to make the gumball calm down when his brother destroy Christmas once and for all. He is eventually stopping Gumball and with Anais, Santa, and Zanta. His hatred towards Christmas is also shown in Space Face, when Darwin telling gumball don't burns down a Christmas tree in the desire room. According to Gumball "Tom's pain is always the best thing about Christmas.".

His lack of eyes have been referenced to many times. In Ruined, Gumball couldn't see his eyes in the dark, before he remembered he had no eyes. When he was about to be attacked by a sea monster he yelled "Life... Flashing... Before... Hm." when he realized he didn't have eyes for his life to flash before (25th Under the Seat). In Hammer & Fail: Rooftop Rumble he rubs his hands into his eyes, revealing there are not eyeballs in the sockets but that the sockets appear to be jet black. In Richard's Soul, Darwin takes his cellphone out of a case by going through a retina scanner, which unlocks since there was no data found. One Eddsworld comic saw him trying to crush some play dough with his mouth, which ended up coming out of the holes where his eyes were and acting like a shape maker. His clones have their eyes removed by forks during the production stage in Spares. In Zanta Claws, when saying "I did not!" Tom has eyes

Darwin does however have eyes in all three Zanta Claws movies. In Zanta Claws, innocent-looking eyes appear whilst he denies that he ate the pie, in Zanta Claws II, he receives eyes from Zanta (however they burn in the sunlight and are later destroyed by a laser gun blast), and in Zanta Claws III, he has angry eyes whilst talking to Zanta, making a random appearance for an unknown reason similar to the original part of the sub-series. 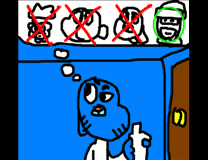 The gallery for Darwin can be found here.

Retrieved from "https://bandadventures.fandom.com/wiki/Darwin?oldid=4573"
Community content is available under CC-BY-SA unless otherwise noted.