Anais Watterson is a main character in Band Adventures. She was fifth daughter of Richard & Nicole

Anais is shown to be unintelligent throughout the show. He tends to use words that create the impression that he is smart, but he probably doesn't know what they really mean. He is also incredibly narcissistic, caring only about his looks. As seen in the game Quest for Bacon he may really like bacon. In Fan Service, it shows Anais being "fatally allergic to dogs", even to the point of killing him. This was likely a joke, however, because in the credits it states Anais "isn't really allergic to dogs".

Throughout the series Matt has many different forms and disguises.

Vampire Anais has only appeared in Anais Sucks so far. On Halloween he was bit by a rude vampire and turned into one. Later he tries to suck Gumball and Tom's blood but is too late because they killed themselves on accident. He later accidently kills himself after stepping into the sunlight. 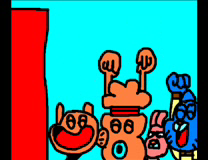 The gallery for Anais can be found here.

Retrieved from "https://bandadventures.fandom.com/wiki/Anais?oldid=4387"
Community content is available under CC-BY-SA unless otherwise noted.