Welcome To The Band Adventures Wiki!
We currently have 81 articles
Contents   (view all pages) 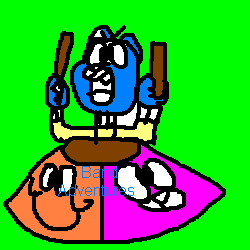 Band Adventures is a comedy animation produced using Paint and Windows Movie Maker, and sharing on sites like YouTube, created by Ivander Yuanata.

It stars three main characters, Three Wattersons Siblings, all based on the cartoon network characters and voiced by Team Eddsworld. Other minor characters make appearances in different animations, or may just be a guest star for one episode only. Previously, Tobias was also a main character, however he is a 2nd son of Nicole and Richard, Tobias left the group in 2008 after Moving Targets was released to pursue his ambitions individually, and so the character left on the screen at the beginning of the feature-length animation 25th Under the Seat.

Unfortunately after a six-year long leaving indonesia, Edd, Tom, Matt leaving on Sunday 25th March 2012. Edd left behind one half of a yet to be released voice actors, with the second half due to be an animation collab. Tom Ridgewell, the voice actor of Darwin in the animations, explained the future of Eddsworld on a Vokle broadcast which can be viewed by clicking here.

Band Adventures Wiki is a wiki created to document the history of Eddsworld as a group, the individual characters of Band Adventures, and each animation that has been released under the 'Band Adventures' umbrella. It also provides a place for fans of the group to post blogs and share the latest updates from Band Adventures, and Edd, Tom and Matt individually. The wiki can only be improved with your help, so sign up and start contributing today!

Retrieved from "https://bandadventures.fandom.com/wiki/Adventurepedia?oldid=4800"
Community content is available under CC-BY-SA unless otherwise noted.